6 VALID REASONS TO INVEST IN A ROBOTIC PALLETIZER

Robotic palletizers are becoming an integral part of industrial robotics. Companies handling boxes, bags, milk crates and sheet stacking onto pallets should consider equipping themselves with this type of system.

Here are the top 6 assets of robotic palletizers with robot

The robotic palletizer is programmed to repeat continuous movements and to support heavy loads. It makes it possible to avoid work stoppages due to the strenuous physical effort that an employee needs to load a pallet.

It also eliminates problems associated with fatigue, distraction, injuries and the effects of repetitive and tedious movements.

The robot can also completely change its purpose either to palletize products for which the system had been designed or adapt programming or modify only certain elements of the system.

The repetition of movement at a constant speed and without error makes it possible to assemble a perfect pallet. In addition, some grippers are able to pick up several objects at the same time to increase the rate of production. Our robotic palletizer can reach a speed of 30 bags or 60 boxes per minute. Depending on production lines and space available, it is possible to increase the number of robots to reach higher speeds.

4- Improves the quality of finished products on pallets

Repetition and precision makes the robotic palletizer possible to obtain high-quality finish for each product. The tasks performed by the robots eliminate the problems associated with fatigue, distraction and the redundancy which often lead to quality problems of finished products.

The robotic palletizer saves more space than conventional palletizing systems. In addition, it can be programmed to work in tight spaces and thus save precious floor space in production areas. 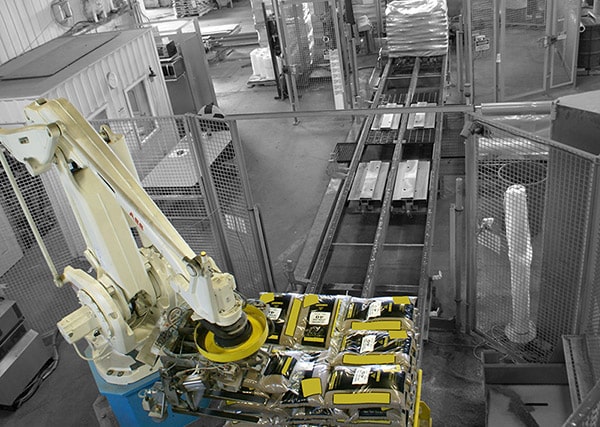 These systems can operate day and night and require little or no lighting, which reduces your expenses by turning off unnecessary lighting. They are also operational at temperatures ranging from + 4C to +50 C, thus reducing your heating or cooling costs. Workforce can be regulated as supervision requires only a single person for several machines operating at the same time. In addition, Robovic’s robotic palletizers are designed to consume less energy for better energy efficiency.

Today, industrial automation presents a fundamental solution that is essential for companies to remain competitive on the market.

If you would like to know more about our palletizing systems…

BACK TO BLOG
HOME

What are some of the criteria to consider before installing a bagging machine ?

Discover the important elements to consider for choosing the right bagging machine.

Palletizing gripper : why control product deposit rather than letting it drop ?

Big bag handling : The difference between the fully automatic and semi-automatic system !

What are the advantages of an automatic tote system vs semi-automatic ?